Tuesday, April 24, 2012
When I was 16 I entered my first night club on a fake ID. It was called the Tivoli, which way back then was where the Metro is now on George St in Sydney. It was the start of a love affair with dark, smokey, throbbing rooms that my parents probably could have predicted from the day they saw me doing "isolations" to Prince's Raspberry Beret on stage at a jazz ballet concert years before.

Late into my 20s I was still addicted to dancing until the wee hours, there were many nights at Danceteria, Metropolis, and a late night North Sydney basement we went to after the others had closed, because 1am was far too early to go home.

I had a 5 year hiatus where I became a rowing nut and went to bed every night at 9.30 to get up at 4am and paddle about in the dark trying to avoid the rivercat until I saw the "light" and joined a surfclub. There I discovered fitness and partying needn't be mutually exclusive. The clubbing began again. The only difference now was instead of arriving at lectures with both eyes closed I was turning up to work that way. Didn't really matter though, it was Advertising, a hang over was considered lightweight compared to most of my bosses, who cured their own with substances said to "enhance" their creativity.

Fast forward to now and I am still sleep-deprived, in fact I feel hung over all the time, problem is I haven't had any alcohol...or drugs (before you suggest it). I am the cancer council's poster child yet a picture of horror. So going out dancing is a distant memory that I currently don't miss...or so I thought. 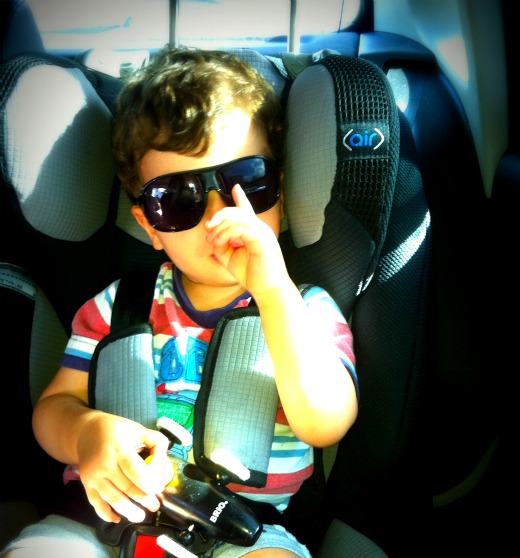 So when Bang, my 2yo yelled out "Shake your Boobies Mummy" in the car yesterday other than laughing my head off at the substitution of the word "Booty" I was surprised at how excited I got to throw my arms in the air, anthem style, and do a caricature of my former self, complete with half-closed eyes while gliding my head side to side. My style was only rivaled by my 18 month old who looked like a seasoned podium dancer, holding his hands together and thumping the sky in time to the bass. From the outside, the car must have looked like it was transporting a bunch of loonies to the asylum, either that or a group of teenagers any given Saturday night, even driver 'Dadda' was punching the air. All that was missing was four fluorescent tubes and a strobe.

Who knew motherhood would be a constant dance party?! Ok so "constant" maybe too strong a word, but I am now* encouraged by two very short people, to spin, shake, stamp and wiggle to Cars 2, the Wiggles and anything with a bit of a beat, like Crash's favourite song "Feel so close"!
(*That is when they are not screaming, falling from height, crying hysterically, fighting over a toy or trying to strangle each other for fun.)

What have your kids made you remember?

Fitzy does a Nudie Rudie in front of my sketchpad 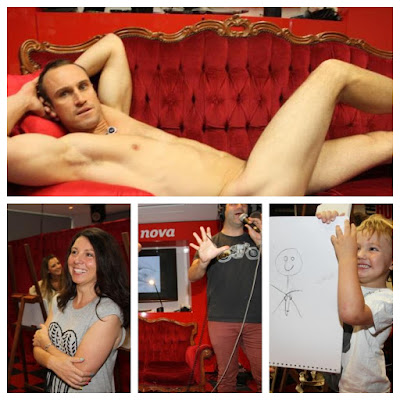 I hadn't even eaten breakfast when I was faced with a man wearing only a sapphire necklace winking at me. "WTF!" I thought and then I remembered that two short days prior I had actually brought this little, I mean quite large (sorry Fitzy!) situation on myself by sending the tweet below. 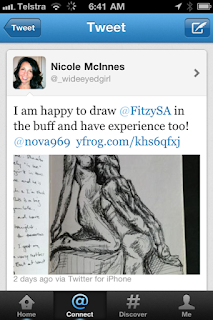 The day started like any other; Crash nearly choked on the apple he snuck out of his kindy bag, Bang didn't quite make it to the potty and I took too long in the bathroom. Then I found myself standing next to Ryan Fitzgerald's wife while her husband de-robed. Despite the indisputable thrill of getting up close and personal (there's a fun euphemism) with my fave radio personalities, Fitzy & Wippa, the real fun was when Fitzy's son Hughie started yelling "Dadda, bum bum...Dadda BUM BUM".

Since becoming a Mum of two boys myself, watching this little man, trying to tell his Dad that he possibly should put some clothes on was priceless. Little people are SO cute and effortlessly hilarious. With Fitzy as your Dad though you may get a bit of a head start in the humour stakes, and showing signs of this Hughie almost stole the show, well for me anyway. Give me a toddler to talk to any day over staring at a 6'5" super cut naked male body! LOL!
(You can see the full hilarious exchange on the video from Nova and also discover that the photo of me was taken surprisingly when Fitzy still had clothes on - see not the dirty p€rve you thought I was).

Anyway I did manage to get some sketching done despite the utter mayhem that was going on around the easels see below but don't think it does him justice.

Sleepless in sanity aka Motherhood

I am a bit of a walking zombie at the moment. I felt in good company though when Bang, my two year old, passed out while sitting in a shopping trolley today. If I'd been in there with him we would have both been mouth open, drooling, head awkwardly balanced against metal bars, rocking suddenly forward as we drifted off to la-la-land. Instead I was leaning against the trolley as I dragged myself around occasionally holding Bang's head up so it wouldn't fall off. I was getting some strange looks, but nothing new there!

I must admit though I am a little disappointed with my near exhaustion, I am a mother of toddlers, not babies, toddlers. You know the ones that don't need a breastfeed at 11pm and 3am, the ones that lull you into this false sense of security when they start sleeping through at 8 months. The ones that make you think that now they were 18 months and nearly 3 that you had seen the last of incessant sleep deprivation.

There are these things that happen after the baby phase, but not straight away, they give you a 3-6 months to get used to needing 7-8 hours sleep again only to hit you with:

TOILET TRAINING
Suddenly midnight and 3am are back on the schedule. "Mama, I need to do weeeeeee!" is the most common sound that drags me from sweet dreams, to pull down mini undies, usually with Buzz Lightyear all energetically flying through the air on them, effing Buzz! Or worse still, to change the bed because you were deluded enough to think that after two weeks of not wetting the bed, you had this superstar, genius child who was going to last the night without having a little dream about "weeee!" while lying asleep in his temporarily dry bed. Let me tell you there's a reason why there is a large part of the nappy aisle dedicated to night nappies disguised as "pyjama pants".

DAYLIGHT KlLLlNG
And just when I thought we may get a full night's sleep plus that extra hour I've been missing for 5 months, back from Daylight saving ending, the sun going down just 1 small hour earlier which unbeknown to me translates in toddler world to rising at 5am. 5AM?!!! WTF?!

I used to LOOOOVE daylight savings. I used to dream about the warm adventures that were available to me once that sun stayed up until 8pm. That was until I met two little people that you would swear were possessed all because some bright spark decided to muck around with the bloody clocks. It will come as no surprise then when I tell you I hate Daylight Saving with a passion now and have renamed it accordingly.

All I can conclude is you have three choices:

1. Move to Queensland (I don't need to tell you what is wrong with this decision, do I?)
2. Don't have children until they are 7 or else keep them in nappies until then (joking! my toddlers seriously rock... especially when they are asleep)
3. Have a whinge on your blog and hope other people laugh at your demented state then GO TO BED and DON'T go on Twitter (I think this is probably the best option, not for any apparent reason of course)

How many years until I get a full night's sleep people?
Ok maybe don't tell me as I'm not currently suicidal and don't want to be any time soon.

3 Reasons NOT to have children?

Sunday, April 08, 2012
Last night I was videoing singing and dancing blue rabbits (as you do) without a care in the world, today I am sitting on the side of a road somewhere between home and the central coast wiping spew off a distraught toddler.

Look I don't want to put anyone off having kids and I can't actually imagine my life without my two inexplicably beautiful boys but I really do now understand why some people choose not to have children. I mean really all they are saying is "I like the idea of not being spewed, shat or pissed on".

As I continue another two hours in a car that smells so putrid I'm thinking of adding some of my own bile to the floor mats, I try and laugh. Life is absurd at the best of times but just when you think you've seen it all you glance at a toddler weeing next to a footpath, a husband working his way through a packet of wipes on a car seat, a smelly but surprisingly chipper creature cooing in your lap and a concerned old sticky peak one eye on us the other on the phone book as she looks up the number for DOCS!

The old lady and her beady eyes did it - she made me laugh. Now I just hope I can stop before it turns into blubbering hysteria that signals a need for a stay in a white room that happens to have padded walls... Mmmmnn comfy.

The true meaning of Easter? ..the bunnies speak out! 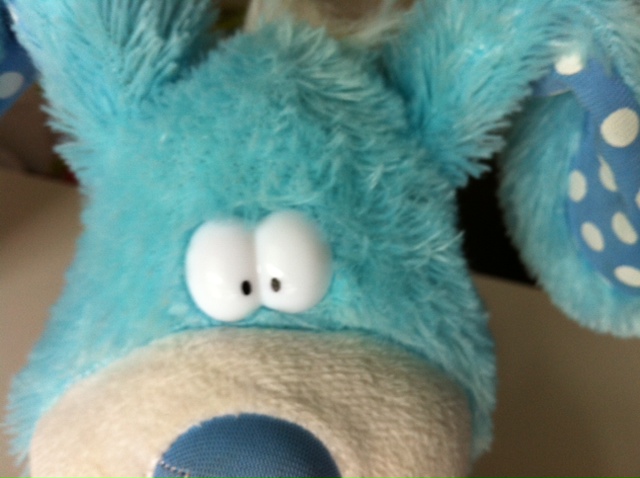 If you were wondering about the true meaning of Easter, and whether it had become too commercial, well fear not! Two blue furry creatures that sing have made sense of it all!

(What I'd really like to know is since when did it become ok to give the Easter Bunny uppers? What is the world coming to!)