September 2014 ~ My IdeaLife
skip to main | skip to sidebar

Monday, September 15, 2014
My gorgeous svelte neighbour got me into Yoga earlier this year and I thought I would go along to relax and chill-out. You know get in touch with my inner self and all that palava, I mean I was kinda desperate being a corporate tragic with two boys under five. Half way through I was dripping with sweat trying to get my arms behind my ears with my arse in the air. It was FULL on.

And at times when doing planks and upward dogs, downward dogs at speed I took the option of collapsing on my face to recover, the instructor said it was ok and that I was in child pose (she was being nice!) 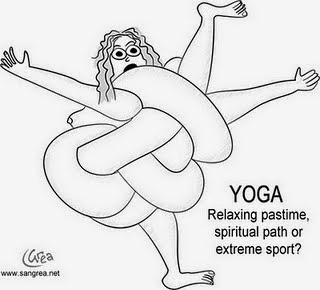 Although you wouldn't know it to look at me now I was once a rower, I even did surfboats for a season, so I have subjected myself to all sorts torture many times over (6km erg tests are the worst). And unlike the one person in the world that stopped rowing in a race, that happened to happen in the Olympics, I'm like the other 99.99999% of them and never have. So being done in by Yoga, was a little bit of a surprise, albeit (eventually) a pleasant one.

There is a reason, I discovered, why there are Yoga studios popping up on every single street corner, it is a weird juxtaposition of spirituality and physical exertion that makes it so amazing. What other sport do you feel like your inner being is being worked on while your hamstrings scream in agony. It is completely illogical and completely effective.

I was lucky enough to be at a resort for two weeks that had Yoga most mornings so I went along and found that my downward facing dog started to get less agonising even within an hour and a half. I also noticed my shoulders that normally are attached to my ears dropped a little more after each class. My 'question mark' body normally curved around a device was straightening out and turning the other way (?) and it seemed that maybe some more blood was getting to my brain.

Look my point is quite simply if you are a hardcore cardio tragic and you think Yoga would be too light for your amazing VO2 then think again, it will be right up your alley and it might calm you down at the same time as working the crap out of your bunched up muscles.

Do it peeps - it so rocks, even for rowers, runners, spin-junkies and any other psychotic sport-types. Namaste!

Update: Discovered hot yogi that can only be described as a walking muscle at my local - even happier now!