My IdeaLife: bloggers
skip to main | skip to sidebar

Saturday, June 30, 2012
Whenever I see a group of bloggers now (commonly known as a Babble), especially the mummy kind, I know what to expect. But it wasn't always that way. I don't know why I assumed that when I first walked into a small karaoke room mid last year that I would find 16 other versions of me. So I was quite taken aback to find nothing like me there. In fact what I found was the most diverse group of women I had ever come across (also the loudest I might add).

Then I realised the reason I'd made that wrong assumption was because life before blogging had always been like that. Schools, Suburbs, workplaces have similar demographics, education, friends and interests. Like attracts like. So without blogging my life would have continued as a microcosm of me, an expansion of what defines me and reassures me every day.

I've read about Bloggers traveling to foreign countries and seeing wholly different ways of life but who'd have thought you could stay in your own city and discover a rich fabric of people, their difference exploding your perceptions of what was effectively a very small world. Equally surprising is that my unique life is adding depth and a new hue to their lives too.

When I had lunch last week and Trae Flett of Where's My Glow? fame said her RL friends were threatening that she soon would be only left with e-friends she literally guffawed "They obviously have no idea how awesome my e-friends are". Like Trae, despite adoring my RL friends, I also see my e-friends as amazing too. Now every time I know I'm going to meet up with bloggers who I normally only talk with online I know I am in for a treat.

We only had two things in common when we all first met, we were Mums and we had blogs and that really was it. But now there's so much more, as we share with our hearts on our sleeves, we always end up somehow together in hysterical laughter. Like I'm sure we will today at the latest meet up, Nuffnang Blogopolis! Stay tuned for more hilarious photos.

OMEGA DELIGHT CHANNELS WILLY WONKA IN THE FIGHT AGAINST STUPIDITY

Saturday, February 18, 2012
A few weeks back I was kindly invited by The Mother Media to preview a new product by Nature's Own called Omega Delight. I was a bit excited, and not for the obvious reason, that is, we were having lunch at Flying Fish. I was excited because I was about to be introduced to a product that would eliminate one of the million guilty thoughts I have had every single day since I became a Mum. The one being addressed by this event was:

"Oh my god I haven't cooked fish for the boys again this week...if I don't give them enough fish they don't get Omega-3 and if they don't get Omega-3 their brain development* is stunted and if their brain development is stunted they will not reach their full potential and then they'll end up unhappy, unfulfilled, sad and probably living in a box by the side of the road eating dirt and it will be all MY fault."

As the R&D guys tinkered around with emulsions and humectants, I wondered if they realised that they weren't just creating a fish oil supplement, they were creating a prevention for both insanity in Mothers and homelessness for the future generation. Probably best not to share that with them though, the pressure would have been so distracting they would have never come up with anything as tasty and unique as their blissful ignorance finally produced.
And it does taste good. Both my toddler boys love it, with Boom wanting more than his one teaspoon dose per day. I suggest putting a third of the dose in a spoon and then give in twice to the cries for more to get the full teaspoon recommended in or just hide the lot in yoghurt! Yes I know, fish oil and yoghurt - yum...but these particular food scientists seem to be giving Willy Wonka a run for their money. I wonder whether 'Roast Dinner' flavour was considered? 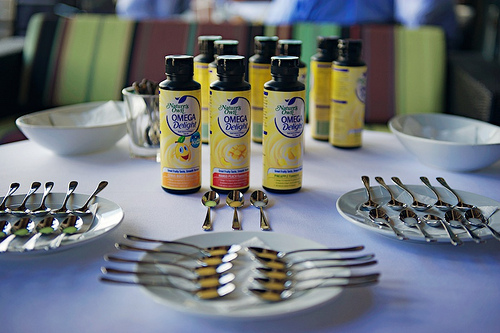 Anyway I am off to prevent my children becoming lay about, useless adults with some yummy gooey mangoey stuff. And if you know what's good for you, (fish oil in case you haven't been listening) you'll head out and get this stuff (it's a bit pricey but I saw it on special at my local Woolies for half price).

On to more important things what do you think Mrs Woog was thinking?
Tell us in the comments!

In case you are still stuck on my insanity and my sons' near misses with homelessness:
*Omega-3 is a type of fatty acid which is found in oily fish such as salmon, mackerel and herring and is required for optimal brain function and is thought to be beneficial for behaviour, cognitive function, memory and attention. As children grow, their requirements for Omega-3 may also increase.
According to a study done for Nature's Own only 1 in 5 children are getting the recommended 2-3 servings of fish per week and therefore enough Omega-3 for optimal brain function and development.

This post is an honest review and not sponsored except for provision of a lunch and product samples.

Blogging and the bright side

Sunday, October 02, 2011
There are two groups of people who have an unlikely but uncanny resemblance to each other they are:

Eternal optimists you know the glass-half-full types that can turn being shat on by a bird, for example, in to a life lesson. “Bird poo in your eye, a lucky day is nigh” they sing song, smiling a smug smile, as they reach for a tissue.
And Bloggers normally the glass-half-empty types but that was until they started blogging! Now every “bad” situation is an amazing opportunity for a blog post of comedic proportions.

Tripping over slippery dips, previously a painful shock, now at the very least a hilarious tweet. Locking yourself out of the house, once a terrible and frightening inconvenience, now the basis for a soon-to-be-documented fantastic adventure to Mr Shu-Fiks. Being caught naked by a lorrikeet, usually relegated to the top ten dreaded moments in life now becomes what you live for. Being terrorised by a small furry creature, other than your husband, becomes the stuff you only thought you couldn't read about

There’s only one disclaimer, one red light in your new world of greens, that is: did you get it on camera? Those dark moments can suddenly turn dark again if you didn’t have the foresight to whip out your iPhone mid-spew, slip, spill, crash or poo moment.

Bloggers are the new paparazzi for their own disasters among other things. Here are a few I was lucky to catch.

So once a whiney negative moo moo, blogging has transformed me into an annoying optimist, cheerily philosophising “well it’ll make a great blog post” as I get splattered with projectile poo...Tissue please!

What are some of your favourite proverb-making moments?

Blogopolipsed: my ten most memorable moments

Monday, August 01, 2011
I just got back from an amazing day dedicated to all things blogging: Nuffnang's Blogopolis in Melbourne. As you can see by my archives I’ve been blogging for only five months, so I’m a rookie at all this palava, but new or seasoned, you couldn’t help but be inspired by the amazing line up of speakers. And by amazing I don’t just mean being able to present to 300 people looking down at their smart phones.

To get the full picture Bree from TheBlogStylist published notes live from the event. For a snapshot of a woman’s escape from the asylum and what freedom taught her click here. And for my Blogopolis most inspiring moments, well they’re right here.

3. Andrew Hughes “Where’s Glowless? You have the best media kit, better than some media publications” Glowless nearly passes out from modesty or lack of oxygen (was suffering a slight allergic reaction at the time) hard to tell

4. StylingYou “Make us laugh, cry, think. Give us an insight into your life”

6. ProBlogger encouraging us to listen to his insightful son "make sure you tell [the world] something important"

7. Edenland so inspiring. All I hear is “just f**king do it man” between every line. That was before she broke the microphone presumedly to have the last word

8. FrillyHills “write as if you’re talking to a girlfriend you really like in your living room”

9. MagnetoBoldtoo “I'm not a biatch, I’m THE biatch”

10. One drunken exchange between two bloggers to remain anonymous.