When I was a child-free, busy career-woman waking up to the sprinkling of rain on a weekend was kind of romantic and the perfect excuse to stay in bed longer. The worst that could happen is a picnic or BBQ would need to be moved undercover, but to be honest I wasn’t really rolling in picnic invitations. In fact most weekends I was suffering from at least a minor hangover, so really the world could have frozen over outside and as long as I had a doona I’d be happy. 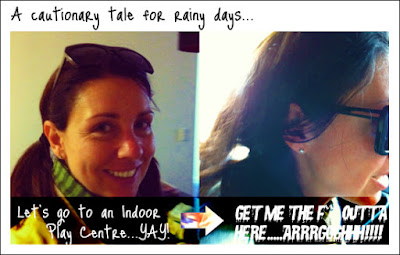 Then two tenacious little wriggly things changed all that when they found their way through the perils of my uterean landscape into ovum heaven. Rain on a weekend now means only one thing and it is no longer a nice warm lie in, it in no way resembles a snuggle as you drift between hazy consciousness and la-la-land, and it causes worse brain damage than any amount of alcohol consumption. ‘IT’ is the INDOOR PLAY CENTRE.

Three simple words that in isolation are all quite innocuous, they could even be seen as quite positive, but when combined in this particular order contain the power to strike fear into the hearts of the brave, reduce the stoic to cowering messes of tears and transform the cool, calm and collected to hot, bothered and berserk.

Funnily enough the truth of this doesn’t prevent desperate parents from once again venturing into the fray at the slightest hint of rain. For some reason the last memory of play-centre insanity is overshadowed by the more recent hell raised by two trapped banshees, I mean boys, in the space formerly recognised as the home. Which, after a morning of rain, is easily mistaken for a small landfill site. And letting them loose in a ball-filled pit of despair seems like the better option to living in a tip for a day…until you arrive.

The noise itself, something akin to the screams of a thousand cats being strangled, would send any normal person running in the opposite direction, but to a parent on a rainy day, they stay the course, wildly hanging on to the hope that this time, despite blood pouring from their ears, it will be fun for all.

It really isn’t until you are through the door and you lose sight of one child in the multi-level tunnels, nets and padded shapes and the other disappears under a rainbow of germ-infested plastic balls that the horror returns and you realise the error of your ways. By then it is too late to retreat as your hell, is your children’s idea of the most fun they have ever had in their whole life.

On this particular morning I looked jealously at parents sitting at tables, relaxed with coffees, smug in the knowledge they can leave there over-four year old to fend for themselves, which is code for my child is now big enough to run into, push over, throw balls at everyone else’s children. Conversely I removed my shoes and ran around on padded vinyl, batting big kids out of the way and diverting incoming missiles as my 16 month old giggled his way through mazes and ball pits. My only consolation was knowing my hubby was currently squeezing himself through a wobbling, netted tunnel three levels above the ground in an effort to keep sight of our 2 year old, who was about to disappear into a mess of mangled bodies hurtling themselves down a 30ft slide on hessian bags.

There is always an island of respite with a sign above it stating, “under fours only”. Again a glimmer of hope returns as you drag your child towards the single level, fenced in, near empty toddler area, and almost hysterically sell-in the excitement of what is obviously the most boring area in the centre, even a dirty cup off the floor is more captivating, because god-forbid you could be allowed to relax for more than 5 seconds. Their sudden possession by the spirit of hell drawing them back to the rampaging levels of mayhem drives you back through the gate to hell again. And you watch as they head, giggling for certain injury.

We escaped this time with only a four year jumping on our 16 month old’s head from height no less, but xrays were not required, and other than the obligatory “Damien” impersonations as we try to extract our little energy balls from their extremely fun “pinball machine”, we escaped with our lives only just. But I know I left about ten years of my life in there and if I ever consider going again I require you to smack me in the head with a large shovel.