POSITION VACANT: One Housewife ~ My IdeaLife
skip to main | skip to sidebar 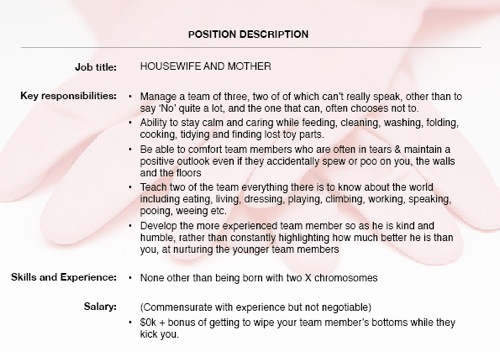 As the lovely Andrea from Fox in Flats-infamy highlighted last week on Twitter I am returning to work in January after 15 months Maternity Leave, and wait for it...fulltime. I know collective gasp from many including me sometimes. But despite a bit of a go, I am being sacked from my role as Domestic Goddess (actually my job title was Domestic Avoidess but no point in getting caught up in semantics).


This lack of natural ability in grocery shopping, cooking, cleaning, washing, tidying etcetera has caused the constant hum of guilt to overshadow my time as a Stay-at-home-Mum. Who knew that housewife and Mother were synonymous! I didn't and nothing really prepared me for the expectation that if you are not working out of the house, you are working in it.


Don't get me wrong, everyone has to contribute so it stands to reason that who ever is at home, Mum or Dad, gets lumped with the home management. Problem for me is I have always viewed housework with particular disdain. Probably because society places no value on a well-run home. Who nowadays really cares if there are a few crumbs on the ground or toys are not neatly put away. As long as nobody is sitting around in 3 day old food or worse then you are doing ok as far as I'm concerned.

But it runs deeper than just lack of acknowledgement. When I was a child I remember feeling so confused and hurt by the fact that my brother never had to do the things that were expected of me, like sewing, ironing or cooking. My constant question "Why do I have to do it, when he doesn't?" was usually met with “Because I said so”, which to my mind translated to “There is no logic or reason behind this unfairness”. The reality was when I was growing up girls were still expected to learn and know things about managing a home and at most, boys were taught how to mow the lawn, change a tyre, but most importantly how to sit on the couch, watch sport while drinks and snacks magically materialising next to them, usually courtesy of the nearest female.

This injustice and my determination to overcome it rendered me slightly crap as a "housewife". Luckily my husband has no such hang ups about chores. He doesn't question his validity as he hangs out the washing, he doesn't associate stacking the dishwasher with discrimination and he certainly does not feel like he's giving up on fulfilling his potential by changing the bed sheets. Unfortunately I do, albeit in a subtle way. But as I look back at my 15 months 'off', I can see clearly that for some reason being a housewife makes me feel like a failure in a way work outside of the house never has. It is not logical, in fact it is the opposite as what could be more rewarding than working for the benefit of the people you love the most in the world?

But there you have it, I prefer the paid work to the house work.

Luckily, as I hand one of the household reigns back to my hubby, I can take comfort in the fact that 'Housewife' and 'Mother' are two different roles. Just because I am no longer at home with my children, does not mean I am no longer 'Mum'. In fact with the extra help we are getting I may find I get some more 'play' time with them, rather than yelling at them from the laundry to stop trying to impale themselves from a great height on to Lego towers.

If I stayed home and continued to feel anxious about my missing-Goddess, and the relationship that has with my Mother-role, then I would not be doing them the huge favour some assume. A Mother feeling like a failure around 24/7 is far more dangerous than a confident, secure one who is away for 38 hours a week, I’m sure.

Now to the task of securing contentment… hmmmm… maybe I’ll go and fold some clothes.

Is housework your mental disorder too?