Is Facebook going bad or moving forward? ~ My IdeaLife
skip to main | skip to sidebar

Tuesday, September 27, 2011
As you can probably tell from my smattering of posts about Facebook on every social media network I’m a bit taken with the new Timeline feature. It is so fun and you can read my full rave over at JustB.

Status updates 2007-style
One of the cool things I didn’t talk about though was the hilarity of rediscovering your early posts through Timeline. You remember when the status header always had “Nicole is…”? Which was quite limiting if you were fussy about your grammar (not that I was or am, as you can probably tell). Anyway when I saw these scintillating updates I couldn’t stop laughing. My excuse is Social Media was so in its infancy and we didn’t really know what we were doing, ok so maybe some of you did, but as you can see by the below I had no idea! 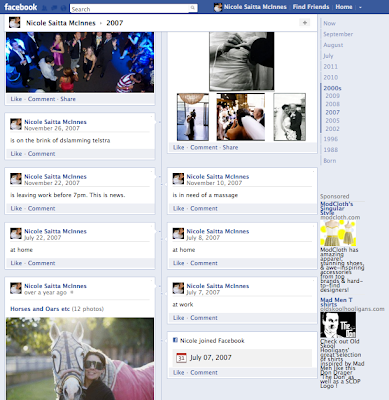 The other side I didn’t really cover was the concerns people have raised about privacy. The good news about Timeline is all your posts come over with their current privacy status, so if you have only ever shared photos with friends, or even a specific set of friends that won’t suddenly change. So the only real issue is that posts from your past are now accessible to you and those they were originally shared with, that is unless you go in and remove them, delete them or change their privacy state, all things you can do.

Nobodies more interesting than Celebrities? What?
In this age though where sharing is being turned into a source of entertainment, nobodies are replacing celebrities who formerly were the only ones that walked that hallowed ground. The new Facebook changes take advantage of this phenomenon and just bring it up to speed with tools like Twitter and Instagram. People like to be followed and now you can select content from your timeline to make public and then offer yourself up to be subscribed to. That way strangers who subscribe to you can receive your public updates in their news feeds.

The Social Media age
For many this is great news as it gives one access to a greater audience if that’s what you’re after. The down side is the widening of the potential to make social errors, especially ones that may lead a young person in to harm’s way. But that is the case across many other social media tools already including the very controversial Google+ which insists you use your real name! The answer is the world is changing and we need to keep step with it and educate our children on the amazing potential social networks offer while drilling in to them the dangers and the rules that will ensure their safety.

Facebook Timeline goes live on October 1, but you can try it now by following the instructions here.

What do you think? Is Facebook going bad or moving forward?