He didn't tell me how to live; he lived, and let me watch him do it" CB Kelland ~ My IdeaLife
skip to main | skip to sidebar

He didn't tell me how to live; he lived, and let me watch him do it" CB Kelland

Sunday, September 04, 2011
My Dad is one of those men who don’t speak much and I’m not sure whether that is why he is so popular or whether it is the easy confidence he exudes, but to know him is to love him. And who was I to buck a trend? The truth is I absolutely idolised him as a child in a way only a daughter can.

My poor mother was so excited to be having a girl (I have one older brother), someone she could pass on feminine knowledge and ways to, but I turned out a terrible tomboy and was often found under the car with Dad as he showed me how to change the oil or the like. If I wasn’t holding the makeshift electric light over the engine of the car, or passing him a wrench, I was standing on a wooden crate in Dad’s workshop watching him build whatever contraption was needed for that day’s project.

And if you saw this place, inconspicuously hidden under the front verandah, you’d understand why. It was literally a man cave in an epic way with every type of tool you could think of. With the twin wheel grinder and industrial sized clamp front and centre, there were draws of screws, washers, nuts and bolts; every type of spanner, wrench, hammer; and every kind of scrap material from flyscreen to soft lead sheets used to make fishing sinkers of varying sizes. We didn’t need Bunnings in those days, all we had to do was go to Dad’s workshop and whatever you needed was there.

Mum was not a fan of the workshop, it was organised chaos and more than a little bit dirty. And those are two of Mum’s mortal enemies. But I’d venture to say the workshop was just another thing that took him away from her. He was a shift worker for his contracting business and if he wasn’t working, he was fishing, playing his double bass in a ‘70s nightclub or in his dark workshop. I used to long for him to come home as there was definitely not enough Dad time for any of us, especially Mum.

So today, in a time when Mothers still play the primary role in the life of their children I wondered whether it was fair that Father’s got a day, “shouldn’t they just get an hour, it’s good enough for the earth”, I half-seriously considered. Then I thought of my Dad and how he had taught me what electricity is, how to change a tyre, how to hammer a nail so it didn’t bend, the nature of different metals, how to saw wood so the teeth don’t get caught and how to make useful things from whatever we had lying around. And I realised his ever-present patience and generosity to spend hours teaching me things that in the end inspired me to complete a degree in Industrial Design, deserved to be celebrated for longer than an hour.

Even now as I watch him with my two boys I see the same patience and imagination he shared with me, revealing itself again, and like many before them, they can’t get enough of him (only last week Crash, who’s only 11 months old, cried when I took him from his Pop!). 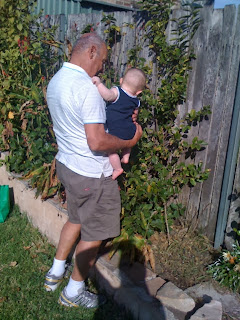 So despite him being around less when I was young and being much more reserved in the way he showed his love, I knew I was loved and accepted as just me, and not just accepted but adored and empowered. Thanks Dad, Happy Father’s Day.

Why does your Dad deserve to be spoilt all day long on Father’s Day?