Thinking The Thinker can NOT be male

Saturday, August 27, 2011
Have you ever heard the insightful statement ‘I think you’re over thinking it’? If so, did a female say it? No, she didn’t, did she. It was more likely some brain-starved male attempting to cover up the fact he didn’t hear a word a poor girl just said to him. [Bitter much, Nicole!?] Sorry, but hubby (Boom) says this to me at least once a week and I.don’t.like.it. 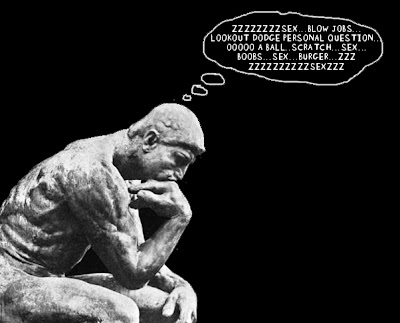 I don’t like it because it’s really the total opposite of anything close to being helpful. And it’s usually said when you’re already feeling unsure or vulnerable or anxious or as is the case with me, all three.


Here's a typical scenario:
Me: What do you think of this post?
Boom: It’s alright. Where’s the tv remote?
M: Is it too obtuse, crude, personal or boring, or all of the above?
B: No, it’s fine. I’m sure it’s around here somewhere. Did the kids have it this afternoon?
M: Can you give me a little more detail?
B: The tv remote. You know. White. Buttons.
M: Forget the remote. What do you mean ‘it’s alright’? Do you think the ending could be better?
B: No, it’s fine…stop over thinking it.
M: [pause, breathe] Stop.over thinking.it?
B: Yeah, just post it and move on….then you can help me find the tv remote.
M: [let the tirade begin] Do you think that if I didn’t think, my posts would be better? Have you ever thought that maybe when you crack a smile at one of them it’s because I may have spent a lot of time over-thinking it? And do you think that if I thought my life would be much improved by a lack of thinking I would be able to just simply think less? There is no switch you know.
B: [no response for fear of being stabbed with a crayon or more likely because he just found the remote in his pocket]

My husband did stop to explain, probably in an attempt to put out the fire that had exploded from my head, "I'm just trying to say, don’t second guess yourself, trust your instincts and just do it”. I wish he would just say that in the first place and spare everyone feeling a little burned.

The truth is this over-thinking statement pushes my buttons, in a bad way that is, because:
1. I know I am over-thinking it because at the time I'm not trusting my own instincts;
2. Him pointing it out makes me question myself even more and
3. I am quite jealous of people who do, trust their own instincts that is. You know the ones that don’t ponder for hours the ten million potential iterations of outcomes that could result from this one action, or if they do they are so at ease with life that they don’t mind what outcome eventuates. They just think 'what will be will be and I’ve done the best I can' and then move on in a light skipping-type way, while probably humming a ditty.

Boom is one of these people, although his skipping is a little un-coordinated. He is a doer rather than a thinker and while I’m building a flowchart in my head, he’s opened the box and getting on with it without any regard for the instructions.


So, is over-thinking over-rated or
is it reserved for the fewer but greater outcomes?
Would we be better off with less neural activity?

P.S. If you can’t already tell I am trialling not thinking as I write this post. So, if you don’t like it you’re welcome to tell my hubby off for telling me not to think.
P.P.S. But maybe this post represents over-thinking perfectly. Dwelling on over-thinking enough to write about it probably represents an unhealthy exercise in over-thinking (now my brain is starting to hurt). I’m going to try to stop thinking.
P.P.P.S. It didn’t work, still thinking but can stop writing.
P.P.P.P.S. Failed there too. Still here. Ok so the first and second P.S. were, how do you say, full of shit really, I've over-thought the crap out of this post for a day...as you can see over-thinking is over-rated! Arrrgggghhhh!