SAD MAC: Apple ain't all Genius it seems ~ My IdeaLife
skip to main | skip to sidebar

It seems the online gods are having a bit of a laugh with me of late. Firstly our telco decided to move our internet connection in such a way that once it was on the new system it didn't work. Look I used to work for a Telco and I know the spaghetti wire world that our internet connectivity is tenously balancing on, so the word 'migration' strikes fear into the hearts of most Telco workers because it loosely translates to call centre meltdowns and 24 hour days. 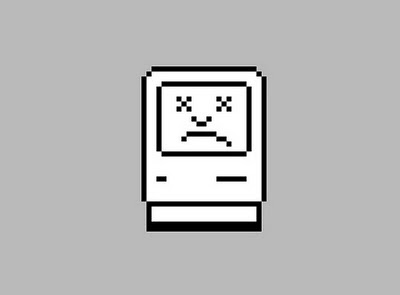 Secondly less than two days after getting back online, and being rightly credited for my downtime (Thank you iiNet) my infant-aged MacBook Pro, actually it is better described as 'my right arm' carked it. My little silver slice of former perfection is now telling everyone it comes across "I've had it, no more blog posts, no more tweets, facebook shits me too, and don't bloody start me on Google+! And do you think 11GB of photos is enough? no? Well just piss off then and leave me to die". Not so helpful from something that is currently storing the data from the last ten years of my life. And as it is our home computer it also has my whole family's life recorded on it.

But the real shite happened when I went to my beloved Apple for help. When it first died I called the Apple Ambulance and they tried CPR and then advised I rush it to Emergency, aka the Apple 'Genius' Bar. It seems 'Geniuses' are in high demand and I would have to wait five days to see one in the City. But if I felt like travelling 28km north I could see one that afternoon and the genius on the phone said they probably could have me up and running that afternoon. So off we went and 40 minutes later we were in the hands of a genius. This Genius was very friendly and kind and gave all the appearance of being as useful as a Mac itself. Problem was he's not really a genius, and it became apparant quite quickly that 'Genius' in an Apple Store could as easily mean 'Useless smiley fellow'.
Upon trying a data-transfer once and failing, they discovered the hard drive wasn't a standard Apple part and found it difficult to hide their relief at sending me on my way with my too-hard basket hard drive. Not before they made me drive all the way home though. So over 100 km later I said "It would be nice if you guys compensated me in some way for all this trouble given you have wasted my time and money and NOT fixed my computer, nothing drastic just a show of good will like an iTunes gift card or something?' With the smile never leaving his smug face "I'm sorry we can't help with that here".
Of course not, your customers actually don't matter any more because you have turned into a smiling robot. It would have made more sense if he said "That.is.outside.our.parameters.of.performance. Buzzzzzzz. Stop. Refusing.politely. Sign.here.thank.you. Have.a.good.day". "Well I was having a good day until I spent 3 hours of my life affected by Geniuses such as you. Thank you too for absolutely nothing".

And there ends my long, long, long love affair with Apple. See this is the problem with great branding. We forget that the brand is not our friend. It is not even human and the more powerful it becomes the less likely it is to give a flying f**k about you. How quickly they forget that the relationship between a customer and a company is symbiotic and therefore precious. The reality is the real customers are their shareholders and although customers have put them where they are, it is rare to have any real respect for them.

I thought Apple were different, and not just because of their ad campaign. Even they are starting to forget they are dealing with people, with busy lives, families, pressures and values. Values about courtesy and consideration for others. And making good when you stuff someone around. If you don't you lose that person, they are the rules of life. And while ever your customers are human - you have to follow them, no matter how automated you become, or you will lose them, like you have me, one of your most loyal.