Mummy #FAIL ~ My IdeaLife
skip to main | skip to sidebar

The baby chokes
So Crash*, my 8 month old just choked on some bread crust that I shouldn’t have let him have and so as to save his own life he spewed all over himself, me and the floor. Now any normal person would put this incident down to experience and move on, doubtless not trying it again until the little chap could chew. Me well today I wasn’t normal.

Boom~ warned me not to give Crash the bread and I shrugged off his caution. He gave me that annoying look, you know the one your mother always gave you when you were a teenager. His face quite clearly stated, “you’ll see” as if he was this wise old man.

I secretly was a little worried when half the crust disappeared into Crash’s mouth and I tried to extract the offending piece with no luck and so the almighty spew. Boom came rushing in and kindly didn’t say ‘I told you so’ and took Crash away to clean him up as I mopped up the floors and myself.

Cloaked in chores
Dejected I raced to the laundry in search of chores to hide my shame in and found a load of washing that should have gone out an hour ago, yay! (You won’t see that very often, that is, me getting excited about washing). So off to the yard I go to dwell on my failure. I was in a deep tailspin and bracing myself for the lecture I was going to get from my “perfect” husband. 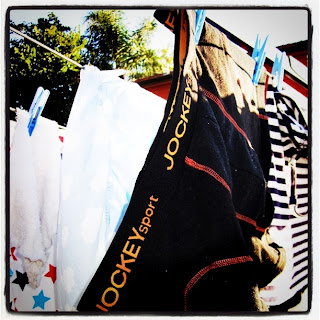 You see my abnormality this particular day was being too hard on myself. If my hubby could forgive me, surely so could I? So I stopped and thought through why I was judging myself and I realized it was wrapped up in the pressure placed on women still to be these perfect earth mother, domestic goddess-types.
If cleanliness is next to godliness, I’m clearly destined for an eternity of flames
That’s not me, especially the domestic goddess part. To be fair being pregnant and/or breastfeeding for the last two-and-a-half years has probably exacerbated my sub-standard approach to home management, but as my Mum will tell you I’ve never been a fan.

It’s ok!
But tonight I’m done with feeling guilty for just being imperfect me. From now on my new favourite phrase is going to be: “It’s ok!” It’s ok if Bang^ wants to wear his Thomas winter PJs under his Bob the Builder summer ones and not his designer outfit to Mother’s Group. It’s ok if I don’t feel like seeing the dirt on the floor and let Crash crawl through it. It’s ok if I’d rather spend an hour on Twitter than doing something “productive”, why do we always have to be so productive? We’re not friggin’ factories! Who was it that decided incessant activity was the stuff of halos anyway?

WORLD FIRST: Mother decides not to feel guilty - is promptly ousted from village.
I’m going to relax in my failings, I’m going to rejoice in my hatred of cleaning, maybe I’ll even have a drink too many and do some swearing to add to my transgressions, but I’m going to give myself a break, I’m going to forgive myself for almost choking my baby, I’m going to let myself off lightly for not having any inclination to re-arrange the pantry, I’m going to sit here and write because that’s what makes me feel whole. I’m a bit of a #FAIL as a housewife, home economist, whatever label you want to place on it and you know what – It’s ok because I like being an un-domestic goddess (even if it means a little shaming in the village square).