My IdeaLife: review
skip to main | skip to sidebar

The Grandeur of Melissa McCarthy

Wednesday, July 28, 2021
Every now and then an actor comes along that is so exceptional she becomes the topic of a humble blog post. Upon first appearances Melissa McCarthy could be seen as an un-couth, potty-mouthed bogan, and these descriptions I think would be fair. I like to think of her as a genius of comedic timing, a master of facial expressions and an utter guru of knowing the exactly right and usually most damning response in every situation. I think the latter is why she has become my hero, she has written and performed the words that so often escape me when someone really needs a swift verbal kick up the arse.

She is such a master my words here will unlikely do her justice, there is really only one thing you must do next time you are hunting around in Netflix and that is watch these scenes in the following movies:
Meeting the principal in ‘This is 40’ and the bloopers.
Any scene she graces in “Bridesmaids”
Every scene of “Spy” and “The Heat”
Worth watching out for are all the sneaky cameo appearances of her real-life husband Ben Falcone In most of her movies. The guy has laid his ego beneath her and the god of comedy so we can laugh at some of the characters he plays, often a love interest, but always with a twist.

Warning though if you hate swearing you may not appreciate Melissa, she made peace with her inner swear bear many years ago and has gone on to make an artform of putting two words together in a way you have never heard before, well not in my neighbourhood anyway.

SPY can be purchased on Google and Amazon prime, but if you subscribe to Foxtel it is available to stream there.

"The architect of our lives" RIP Steve Jobs 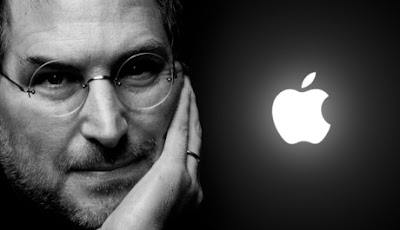 
“Remembering that I'll be dead soon is the most important tool I've ever encountered to help me make the big choices in life. Because almost everything — all external expectations, all pride, all fear of embarrassment or failure - these things just fall away in the face of death, leaving only what is truly important. Remembering that you are going to die is the best way I know to avoid the trap of thinking you have something to lose. You are already naked. There is no reason not to follow your heart.” Steve Jobs, 2005


The quote above comes from a speech everyone should watch. Not because the man died today, not because he was arguably the most amazing visionary of our time but because he understands humans. Like the intuition he has embedded in his products, he seems to have amazing insights into the human condition. His journey has taught him some truths about life, death and fulfilment. And as the world loses him, let us not forget the brilliance he has left us with but celebrate it by being brave and true to ourselves.

My tributes:
The Daily Telegraph "Innovation which captures very soul of humanity"
“Sometimes life hits you in the head with a brick. Don't lose faith." Steve Jobs, 2005


Thank you Steve Jobs for inspiring the world.

RU OK? Day: A shadow at the door 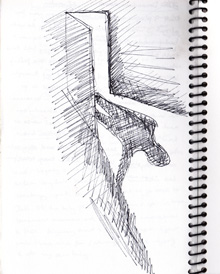 My hubby tells me no-one wants to hear about negative things on a blog, “there is enough negativity out there” he surmises. He would be right too, there is, but I wouldn’t be being honest if I didn’t share my dark days with you as much as those where the sun shines in.

In my late teens after a dishonest and quite mean-spirited boy broke my heart, my idealistic and bright outlook changed. Not content to just see me sad he set out to destroy all semblance of confidence and pride I had. I think he did it to make himself feel like a big, strong man in a desperate attempt to cover the fact he was hurting as much as I was.

I don’t know if I was clinically depressed but I turned from being a thin, vivacious and cute 15 year old to a chubby, sad and awkward girl in under two years. And the sadness I couldn’t seem to bounce back from, threw a shadow over everything. It took advantage of the small negatives already imprinted on my brain and then drove them into deep rivers of blackness that flooded out all the positive patterns that used to co-exist alongside them.

Even my triumphs were stained grey with illogical assumptions. And thoughts spill into behaviour, where you look for evidence to prove your inner beliefs of worthlessness. It is warped, it is powerful and although it only exists in your mind it is very real and sometimes fatally destructive. And that is why contrary evidence is so important in these types of cases. A kind word, an honest ‘how are you?’ or an unconditional acceptance can go along way to challenging this kind of blackness.

I was lucky, my life took a new turn when I went overseas and I was able to rediscover my former vibrant self. I was also extremely fortunate to never have considered suicide, but so many others are not so. Suicide is a leading cause of death among young people aged 15-24 years and claims more Australian lives each year than car accidents. Maybe without supportive friends, a rowing crew and an ever-present black journal I may have been amongst them.

So tomorrow why not take a deep breath, be brave and ask someone the question; Are you ok? And if you do, maybe, just maybe, that kindness may challenge their negative point of view of the world if only for an hour. But if you catch them at a particularly dark moment it may give them that crucial reason they're desperately looking for to hang around.

Wednesday, August 31, 2011
I was meant to write here yesterday but my content got nicked by The Daily Telegraph. So here's the embarrassing back story instead.
I don’t know whether a man half way around the world knows that, in part due to his life’s work, a woman he doesn’t know from Adam is crying because he is off the planet inspirational and she's just heard he is gravely ill.

Sitting minding my own business in a library courtyard on Sunday I was unknowingly about to be rocked to the core, just by clicking play on Steve Jobs’ 15 minute speech to Stanford graduates in 2005. Despite being someone who can’t sit still without a tweet or two every few minutes, I was mesmerised from the start. A lady sitting next to me was also I realised, after she asked me whom I was listening to. "Steve Jobs", I replied, suddenly overwhelmed. “What a nutter!” I thought, “bursting in to tears in front of a stranger!” She was lovely and offered me a tissue. How embarrassing, but really when faced with words such as these below, probably the most logical reaction.

“Your time is limited, so don't waste it living someone else's life. Don't be trapped by dogma — which is living with the results of other people's thinking. Don't let the noise of others' opinions drown out your own inner voice. And most important, have the courage to follow your heart and intuition. They somehow already know what you truly want to become. Everything else is secondary.” Steve Jobs

This man had already made my life more beautiful and more effective and now he was telling me to follow my heart. Should I have expected anything less? And then I find this out because he is close to the end of an all too short and brilliant life. I wanted to rage against the gods, “why him, why take him when there are lesser men who you could take”, but he has an answer for that too.

“No one wants to die. Even people who want to go to heaven don't want to die to get there. And yet death is the destination we all share. No one has ever escaped it. And that is as it should be, because Death is very likely the single best invention of Life. It is Life's change agent. It clears out the old to make way for the new. Right now the new is you, but someday not too long from now, you will gradually become the old and be cleared away. Sorry to be so dramatic, but it is quite true.” Steve Jobs

And this...
“Remembering that I'll be dead soon is the most important tool I've ever encountered to help me make the big choices in life. Because almost everything — all external expectations, all pride, all fear of embarrassment or failure - these things just fall away in the face of death, leaving only what is truly important. Remembering that you are going to die is the best way I know to avoid the trap of thinking you have something to lose. You are already naked. There is no reason not to follow your heart.” Steve Jobs 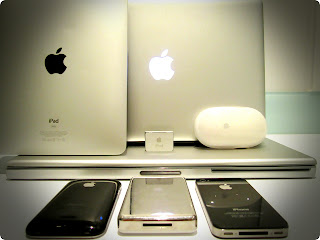 So I dried my eyes and started to write about this man that I don’t know. And I took his advice literally and with my heart in my throat, I summoned the courage he talked of and sent the finished product off to a major newspaper. And the next day as I was telling myself I had lost nothing by sending it, except maybe a little pride, I read an email asking me for a photo of myself and that my story was to be published the next day!

I will cry again for this man I’m sure, his life’s work has been a part of my life for 17 years and his absence will be felt acutely. But today I am just thankful, not only for him giving me my favourite products in the world but for inspiring me to have faith in myself and be brave.

He is truly the architect of our lives and our futures.

If you met Steve Jobs, what would you say to him?