My IdeaLife: Happy Birthday
skip to main | skip to sidebar

THE KEY TO A HAPPY BIRTHDAY: The Front Door 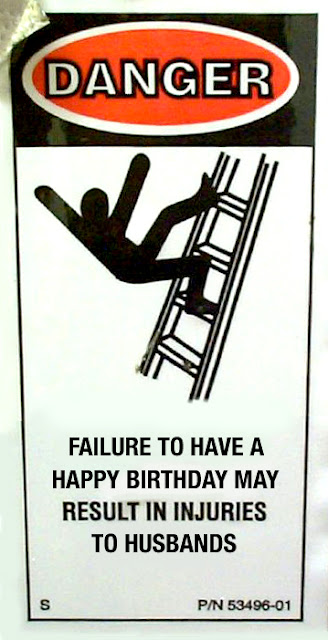 When you read this you could be forgiven for thinking I just make this stuff up. I wish I was making it up because I can't for the life of me figure out how I get this 'lucky'. I must just be special in a she attends a "special" class kind of way.

Birthdays come around once a year as you know, and so on this one day you can say things like:
"No dear, today I'm having a shower first so for once I get to spend 40 minutes in there and you get to spend 5 minutes after that while I yell at you to hurry up" or
"Oooh look Crash has done a big poo, I'm not changing him because it's my birthday".

In fact all bets are off when it's your birthday, well that's what I thought until today. It was all looking as I would expect from a family with two toddlers, I got a card and Happy Birthday sang to me, no present but that’s ok given hubby didn't get one last year (although I had a 3 month old I was breastfeeding so I was lucky to get out of the house let alone go shopping for a present, he doesn't have any such excuse).


Anyway I was even looking forward to the breakfast out with my boys until learning only minutes before that Boom had booked a Chiropractor appointment at 8.30. That’s when things started to feel less birthdayish and very every other day of the yearish. Even the breakfast at a nice café was the usual mayhem, where one of you is always lunging to catch a falling knife or save a full cup of coffee from ending up all over the table or you or both but little did I know it was about to become anything but an ordinary day.

I raced home as it was obvious the little guy wanted to sleep. With one toddler on my hip, another attached to my hand I somehow got the keys out of my pocket to get inside. But they looked strange, and as my conscious mind caught up to the vision in front of me I realised that the front door key had somehow vanished from the key ring.

It wasn't hard to put two and two together if you knew my husband. I quickly surmised he had taken the front door key off to take with him the night before as he was at a function. What the Einstein did with the key god only knows but I'd say it ended up on his key ring, next to his front door key.

After ringing him around 15 times I eventually tracked him down through an ad agency receptionist who was embarrassed to hear the story that I was determined to share with anyone who would listen. He was standing in front of her so I was able to "calmly" explain the situation. He was so “helpful” he said he would come out of his meeting if I got the boys back in the car and drove to him. Great! thanks sweet!

After staring at our 7ft metal side gate and imagining climbing over it using the bins as steps and then breaking a leg as I landed on the other side leaving two toddlers to play on the road, I started putting Crash back into his car seat. Then our elderly neighbour, Jack pulled up. "Wonder if I could jump their fence?" I thought. He was up for the adventure so all three of us bundled up to their backyard and Jack got his ladder out. The boys played with or really just got licked by their dog, as I scrambled over a 6ft paling fence landing unceremoniously in a magnolia tree on the other side. No doubt my tight, low cut cargos were showing an enormous amount of tradie butt crack, not to mention over-exposure of my mini-cleavage. What can I say? the outfit was not designed for scaling backyard fences.

I picked myself up and unlocked the back door and went and collected my little Irish twins who'd found the whole situation quite fun. I looked on the bright side I had sustained no splinters or broken limbs for my birthday, but I had also sustained no presents or relaxation. Hmmmm. So instead of being glum I put my boys down for their afternoon naps and started scheming an equally ‘Happy’ Birthday for my husband in a months time. That cheered me up no end, but I need some help so any ideas on how to make his special day that little bit more extra-special, you know like he did for me. (Revenge is sweet!)