Friday, May 05, 2017
I have written many a shame-driven post about my failure at housewifery. At some point though I have to admit it is so bad it's funny, and I'm just grateful I've married a modern male. Not sure he finds it funny but you can't have everything. 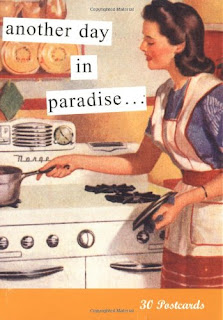 So this one busy weekend I noticed that our grill plate was filthy and somehow this time I decided to take some action against dirt and grime. Reaching for some dishwashing liquid - I did what every time-poor person should do - soak a baked-in grime situation until the hot water and detergent take some of the edge off what would have been a long scrub.
Problem with this decision is my life is so full, if a reminder of some description, usually in the form of a calendar alarm, doesn't exist then follow up action becomes equally non-existent. So it was in this instant. When my husband sat down to enjoy his $20 eye fillet two nights later, my brain still had no recollection of my mini-foray into housewifery. He had commented on the bubbles he'd seen form as he cooked his steak, even this had not prompted my memory. It was not until the words "this tastes like soap", that the correct neurons fired to trigger a conscious memory of my dismal unfinished effort to clean the grill plate. At this point I started giggling, unfortunately he most certainly did not.

Here ends the directions of my first recipe post - how to caramelise expensive steak in dishwashing liquid and live to tell the tale. If you are worried, I am still married, just, not sure how or why, maybe I keep his ordered life interesting and somewhere buried deep down he appreciates that... I mean who doesn't love bubbles?!