Monday, October 24, 2011
After 9 days enduring, I mean enjoying travel with two unruly toddlers and a very stretched hubby I fumbled to a seat at the Problogger training day 15 minutes late, sweaty and flustered. The next 15 minutes was spent swearing under my breath about the wireless connection that decided to cave under the pressure of 270 bloggers telling the twitter world what they were seeing and doing. 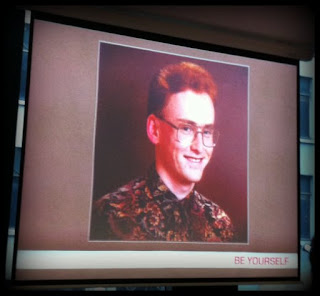 …and immediately regretted not listening for the last 15 mins. Darren Rowse is a classic, and I was missing out on the intelligence and deep understanding he has of humans that has got him to where he is today. That is a huge blogger making more than a healthy living from what he loves to do. 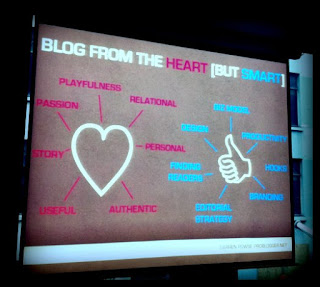 But I was still feeling a little faint and when Nathalie from EasyPeasyKids tweeted she had a bag full of chocolate, I jokingly tweeted back I needed food and minutes lately I was tapped on the shoulder with a chocolate - the breakfast of champions. And behind me was not only Nat but the lovely Yvette Vignando who if you don't know her face already can be found occasionally slumming it on The Morning Show. So cool to at last meet her IRL and thank her for her online generosity to me.


The rest of the day was filled with gems of wisdom and a reminder of all the things that I need to sit down and do, instead of danging around on twitter and facebook. Including Nicole “PlanningQueen” Avery’s advice to do your writing before you check your email, a practice I am undertaking now and probably the reason you are reading this – thanks Nic!

But one thing that stood out more than any other comment and it was from Tim Ferris, the guitarist from INXS, well that’s what I thought, but really he is the genius behind the four hour work week. He said “Decide what success for you will look like in three years time, now” It seems so simplistic but I have a blurry undefined feeling about what I want from blogging and I have never sat down and clarified why I spend hours and hours writing, dwelling, tweeting and researching all for a relatively unpaid pursuit.

So I am going to head off and write down what I want to achieve and then I may have half a chance of getting there, wherever 'there' may be.

But before I get too productive I have to take the time to mention the bloggers. It was so cool to see people you only catch a few times a year and to meet people that you feel you already know from hundreds of exchanges on twitter. Liss from Frills in the Hills single-handedly helped me to breathe out for the first time in 10 days with a much-needed, gorgeous hug - thank you! x. Eden was the perfect lunch partner as she didn’t mind me speaking to her with my mouth full, in fact she joined in too. We were only one step away from opening our mouths mid-chew to gross eachother out! Maturity is obviously over-rated...which Danielle from Lenovo fame, Nathalie from easypeasykids and I took to a new level in the afternoon session. They helped to remind me that we are still teenage girls on the inside, giggling during class to ward off passing out. Laney from Crash Test Mummy and Denyse Whelan were hilarious drinks partners, and it was so cool to realise that Andrea from FoxinFlats and I unknowingly share a besty in real life!
Can’t wait to see everyone again at the next meetup and I promise to be well-rested next time – then I might make more sense….then again maybe not!
Posted in: #pbevent, blogging, Darren Rowse, Melbourne, networking, Nicole Avery, problogger training day, show, Tim Ferris
Email This BlogThis! Share to Twitter Share to Facebook
Newer Post Older Post Home