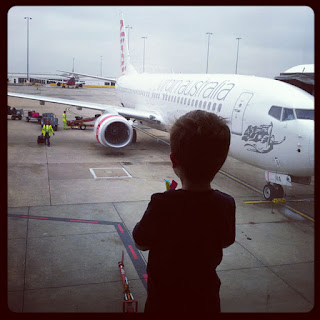 Flying with children, especially very young children, is always a source of some anxiety for parents. Such was the case on Thursday when we woke at 5.30am to ensure we were on our early, but short flight to Melbourne.

All was going ok with the only casualty so far being the Virgin Lounge floor and a few very serious Lounge patrons (I love the looks I get when Bang or Crash make Pro Hart’s carpet ads look amateur, mainly because pre-child I was fantastic at delivering them too, karma).

Anyway things started to turn ugly when all the planes behind and in front of ours started boarding – the space next to ours…empty, the only clue to the delay was the ever-changing departure time. Three amendments later we were called and then seamlessly aboard, phew!

Things just kept getting better, takeoff was a breeze with a bottle shoved in Crash and cloud-spotting with Bang, I was feeling very smug and stupidly proud of my brave boys. Other than their desire to climb all over the aircraft once the seatbelt sign was turned off, we were coping pretty well. Then Crash passed out which was perfection.

Even the pressurised water bottles that turned into one metre high fountains at 20,000 feet weren’t going to dampen my spirits.

But then we looked away from the ocean, that is my 2 year old, for only a second. As my hubby and I were patting ourselves on the back for a race well run, a huge wave hit in the form of the seatbelt sign flashing on. We still didn’t see the magnitude until it was too late, but the simple and unavoidable act of strapping Bang back into his seat unleashed a screaming tsunami. No amount of “listen for the wheels!”, “ooooo look a digger, did you see the digger!?” and so on could stop the deranged song he intended on entertaining the whole plane with until we hit the ground.

I went into this adrenaline-filled state, eyes darting around frantically looking for distractions, my mind-spinning thinking of calming things to say, all in an overly animated voice that when I think back sounded like Giggle and Hoot on speed.

We got some respite as we taxied towards the gate as there were planes and trucks to be wondered at. But the hysteria that was sitting just below the surface was triggered again when we had to leave the window full of big planes to watch for the baggage carousal. At this point I almost forgot I had another child. Refreshed by his nap he just quietly looked on slightly bemused as his big brother writhed around lunatic-like. When it was my turn to take Bang for a walk to calm him down while we waited for the straight-jacket, I mean pram to come out of oversized baggage, I spotted a cherry picker and with insane hope and excitement headed towards the beeping equipment. My dreams of a screech-free world were quickly shattered by even more intense screams and I found myself sort of insanely walking in circles towards the cherry picker and away again as I tried to decipher the reactions and tear-filled shrieks.

This is when I started to laugh, which of course didn’t help my poor exhausted boy, but I couldn’t help it. It was so insane it was funny, and the picture of me doing circles with a toddler that had lost his nut just tipped me over the edge.

The pram arrived and we strapped our inconsolable little man in there and left him to cry until the hire car arrived and then ten short minutes later as we drove, all shattered in our own way, Bang passed out. His exhaustion demon was quiet for the first time in an hour and beautifully replaced with the angelic peace of sleep.

We can’t wait for the flight home.

If flying with toddlers your armory should include:
A bottle or dummy for infants or lollipop for toddlers during takoffs and landings - A laptop or iPad with Toy Story DVD on pause - Small toys, favourite books and sticker books - A fun way to explain why we all have to put our seatbelts on - Snacks - Water bottles that don’t have pop-up straws - An imagination that would rival the writers of Shrek - An off-the-wall sense of humour - Did I miss anything flying parents?