Phone hacking? Paaahhhh! The real reason behind the demise of News of the World ~ My IdeaLife
skip to main | skip to sidebar

Phone hacking? Paaahhhh! The real reason behind the demise of News of the World

Although appearing like the machinations of a deeply disturbed and obviously deluded mind, sources revealed the real reasons The News of the World actually closed.

Revelations during recent hearings have shown that buckling pressure from a newcomer to the news arena was the truth behind the demise. The Mummy Bloggasylum Daily burst into existence only days prior to News of the World closing, such was its power and influence. With headline stories such as Offended by an Office Breast Pump and Kind, Bearded Christian Has Guitar, Story To Tell it’s no surprise this fledging publication has caused such a furore. 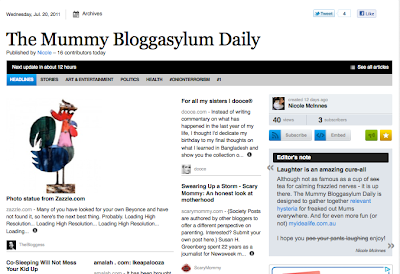 Rupert Murdoch is still talking about the forced demise stating only yesterday "This is the most humble day of my life…" While Nicole McInnes was gracious in her newly acquired Mogul status “I’m ecstatic at the launch of The Mummy Bloggasylum Daily, athough I had no intention of bringing down a paper of such standing, but I'm confident that at least some of those that lost jobs will find new employment within the burgeoning mobile phone industry.”

Sources close to the editor have revealed that despite her public respect for the innocent caught up in the News of the World scandal, she has been heard laughing maniacally in her office. “As The Mummy Bloggasylum Daily takes the place of News of the World, as the preferred paper for fish and chip wrapping, fire starting or covering the homeless, Nicole has seemingly forgotten her humble roots”, a ‘friend’ who preferred to remain anonymous stated. Although they remain hopeful that all this fame hadn’t gone to her head, “there’s a talented writer in there…somewhere.”


HAVE YOUR SAY!
Do we live in a world where The News of the World and
The Mummy Bloggasylum Daily could have happily co-existed?