Oh to be Ita! ~ My IdeaLife
skip to main | skip to sidebar 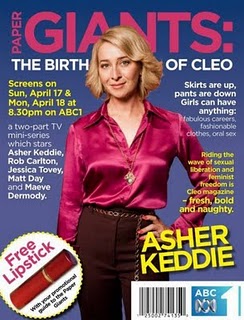 Like many in Australia I tuned in to the ABC’s Paper Giants on Sunday and Monday nights. I was born in the 70s and the footage of red rattlers~, paperboys selling at intersections, 20c tolls on the harbour bridge all brought back so many of my own childhood memories. Add to this the fact my Dad was a newspaper man, and for me the nostalgia of the series was like a beautiful warm blanket wrapped around what in essence was an amazing true story of a woman and mother: Ita Buttrose. No wonder I sat there mesmerised despite my sleep deprivation.
Putting the sentimentality of the series aside, one scene stuck in my mind. It was where Ita arrives home to her ultimately ungrateful, student husband after an obviously long and stressful day at work (picture all 6’2” of Kerry Packer in full flight yelling down at you) only to start dinner for him ‘Do you want onions with your steak?’ and then sit down to the sewing machine! 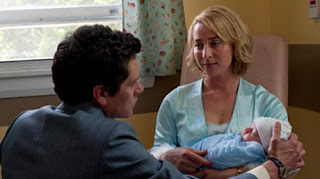 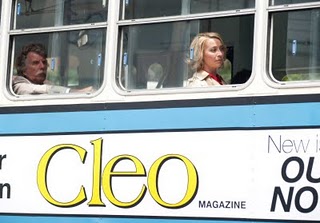 Now I have issues, namely two boys and a man, but none of my males expect this sort of service, thank goodness. So am I out there celebrating this fact? - no instead I’ve been having hormone-fueled meltdowns over things like having to settle both kids most nights or because my husband reads the paper on the weekend while shoveling cereal into our 2 year old, which is not my idea of great parenting.
In fact the list of my grievances is quite long and I know the generation of women before me would probably not understand how or why given how relatively good I've got it. So I did some soul-searching as not so fond of the shouting fishwife lurking far too close to the surface. What I discovered was that expectations are the root of all evil.

I grew up naively thinking that men and women were equal and I expected my husband to be my equal partner in parenthood. So I went to university, I focused on my career, I learnt how to change tyres and the oil on a car, I went overseas by myself, I climbed the corporate ladder. On paper there was no clue that my resume was that of a female’s.
Then I fell pregnant and went on maternity leave. Surprisingly the birth, the obvious gender difference in all this, had nothing on becoming a mum. Fatherhood and motherhood I discovered are entirely different experiences.
Consider these facts about my husband:
Conversely:
No wonder I’m mad (in all senses of the word).
Don’t get me wrong; my husband is by all accounts amazing. He’s one of the ‘nice’ guys: honest and hardworking and always willing to help. He even makes an effort to come home early from work, and the best part is he’s more obsessed with household chores than I am.
So does this generation of women expect the wrong things from their husbands?
Should we be content that our husband's role is fundamentally different but equally as valuable to the family?
At the very least I feel there needs to be an adjunct to the women's liberation message. I would hate to see another generation of girls growing up thinking that men are their equals in every way including parenthood when there are differences that mean you probably will take more time out from your career, you probably will earn less as a result, you probably will get less sleep when your children are babies and you’ll probably also get less leisure/alone time. In fact your world will probably be turned upside down and inside out and your husband’s will just shift a little to the right.
I’m not ungrateful to the Germaine Greers of this world; in fact I am completely indebted to them. I would have stabbed myself in the eye if cooking and cleaning while attached to  a sewing machine were expected of me. I also know that women’s liberation allows us to make decisions that do make us very close to equal if we choose. What they didn’t say though is that most of us would do this carrying around truckloads of guilt, resulting in a woman that is equal on the outside while beating herself up on the inside.
It seems there's no getting away from the differences between fathers and mothers, as research* shows the relational strength of the female brain is in stark contrast to the systematic male brain, in part caused by a combination of differences in neural brain structure and hormones. In layman’s terms: men can’t hear a human voice when a team is running around a field kicking a piece of air-filled leather, and women can’t not hear every voice, emotion, vibe, raised eyebrow within a 50m radius, not counting social media.
This doesn’t mean I am comfortable watching someone as brilliant as Ita Buttrose perform the role of full-time housewife and breadwinner, on the contrary. I just know I would be less agitated day-to-day if I hadn’t walked into parenthood with the expectation that my husband and I would equally share the mundane and exhausting tasks required to maintain a family. We don't and that doesn’t make me unliberated it just means I have a brain of the empathising kind* and he has a systematic one and you can guess who drew the short straw, well for now anyway.
Please don’t slap me Ita!

Would you like Motherhood more if you'd been prepared for
the gender inequality involved?
~ Red rattlers were the old trains that were around in the 70s - they were way past their use by date as had been in service for at least 20 yrs!
* They just can’t help it, Simon Baron-Cohen, The Guardian, April 17, 2003
Posted in: baby, breadwinner, challenges, equality, fatherhood, housewife, Ita buttrose, Kerry Packer, motherhood, paper giants, Papergiants, parenthood, parenting, toddler, Women's liberation
Email This BlogThis! Share to Twitter Share to Facebook
Newer Post Older Post Home